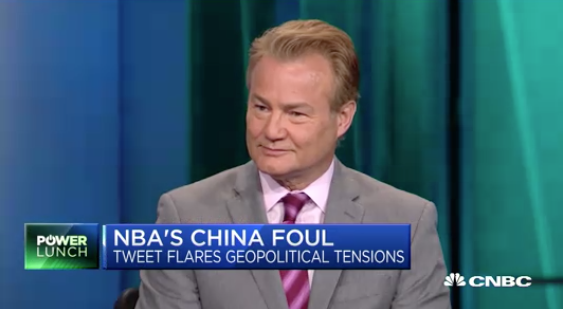 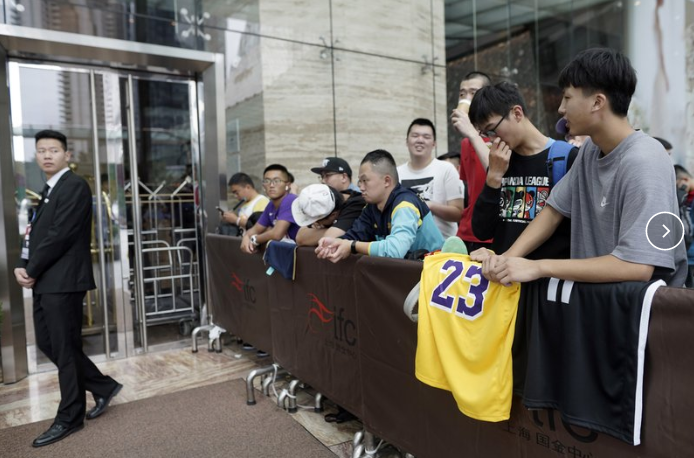 When major corporations have done something to anger Chinese authorities in recent years, the playbook has called for one thing: an apology…

“Dean Crutchfield, CEO of the crisis management firm Crutchfield + Partners, said Morey’s tweet, well-intentioned as it was, could cost the NBA billions. He wondered if a parting of the ways between Morey and the Rockets would appease China.

“You need to fire him and you need to fire him fast,” Crutchfield said. “China needs a statement, and for him to still be in his job is remarkable. I think Silver did a remarkable job with his statement, but this is a senior official, well aware of the importance of the Chinese market. One man, one tweet.” Here’s a link to the article.

Financial Times reports on a new perspective on NBA v. China spat…Few western companies have more at stake than Nike in the fallout from an American basketball executive’s tweet about Hong Kong.

Here’s a link to the article. My POV is that “despite demands from the likes of Mr Rubio, he would advise the company to stay quiet. “Nike didn’t create this war,” he said. “Any crisis manager would say the same: avoid, avoid, avoid.” The episode could yet work to the company’s advantage, he added. “If they play it right, they’re going to sell a lot more merchandise.”

Bloomberg News “As chief executive officer of Unilever, Paul Polman transformed the sprawling maker of Dove soap, Knorr stock cubes, Cif cleaning sprays, and Hellmann’s mayonnaise into a test bed for the idea that companies can benefit from affiliation with social causes, such as improved hygiene or better access to toilets. While investors and analysts were initially skeptical, Polman was ultimately lauded for redefining the corporation as something more benign than a purely profit-driven enterprise, even as margins edged up slightly from the midteens to almost 20% during his tenure. Now, Alan Jope, the Scotsman who succeeded Polman in January, is amping up the strategy. Article here.

The greatest brands in the world have a palpable sense of mission about them. The United States of America gave the world a chance to be different. Its soul is radical. It’s history full on. America has always been a lightening rod, a country that goes charging into the fray as a liberator, a savior, and a protector. Does a divisive country weaken Brand USAs image abroad?

From President-elect Trump and street protests to New Balance sneakers alight and a red-hot stock market is Brand USA facing a chronic and debilitating decline as pundits suggest? Will Trump’s bold, arrogant and cocksure rise to the top job, his rhetoric, and choice of cabinet magnify the issue of our international role and standing? Will it be a leg up, a close shave or a deep cut?

Inside Brand USA there’s a dysfunctional dynamic. Today the country’s divided it lacks cohesion and confuses the world. Right now there’s no one brand that America can rally behind because there is tension between the extreme poles of right and left. The self-denigration inside America, the frustration, lack of self-worth and self-esteem is seen by the world and affects people’s perception. For many onlookers Trump supporters were about making America white again, moving away from the “United Colors of America”. An America that embraces everyone to an America that’s isolationist is a starkly different place.

A country’s wealth is not measured by what it has, but whom it helps with it. Because of this, the world admires America, but many ask what will be the basis of America’s claim to moral superiority going forward. Our greatness has not come from winning, but from leadership with common values and shared responsibilities: power is not a right it’s a responsibility. America had a clear position

in WW2, the cold war, Regan and Obama. As Tocqueville said when he traveled the country, “America is great because it is good and it is not great when it’s not good”.

A thought is as real as an IED. Might the world be concerned they’re going to see an imperial mission for America with Trump at the helm? A brand doesn’t live by itself so for Brand USA to assert that it has no interest other than self-interest is unsustainable in the modern world and our role within it. That’s the equivalent of Trump saying he has no interest other than being elected.

Through all the mud slinging, speech giving and handshakes the burning issue for Brand USA is what is America’s true motive going to be as it handles multiple, urgent and important short and long-term crises simultaneously while formulating coherent long-term strategies? For now, political hysteria reigns, befuddled, malevolent and irrational, but just as things never turn out as Presidents promise, they rarely turn out as badly as pundits warn. Keep flying high America.

Today image is everything – from LeBron James to Apple. Image is what it takes to stand out and win. When you’re talking about someone’s image you’re talking about the brand called You: the impression in the public’s mind of Donald and Hillary’s total personality – their real and imaginary qualities including their shortcomings –because people tend not to forgive people but they forgive brands all the time. Just look at the outrageous things Trump has said.

Trump and Clinton’s brand image is the publics view of them. They’re every bit as much a brand as Nike, Coke or Subway. Because of the Trump brand in this election it makes the case for brand image more directly than any packaged good or consumer product ever could.

Teflon Don has been a brand for years and Hillary needs to behave more like one to conquer that ultimate question why should I care about you? Today she needs to communicate what makes her remarkable, measurable, and distinguished with unique value? It’s a cliché: don’t sell the steak sell the sizzle.

He’s selling the sizzle, the one-liners. He doesn’t have the detail, we all know he hasn’t really communicated well anything about domestic and foreign policy.
Hillary has all the detail, but lacks the sizzle. Hillary has spent her entire life doing public service. She’s spent her whole adult life under the microscope and yet she continues to want to make change, to better the lives of each and every American. And yet she still comes under doubt, scrutiny and distrust. People at the RNC Convention shouting, “lock her up” was unprecedented. There is a poster going around that says, “Hillary, for Prison 2016”. Emotions run so deep and the way Trump has run his campaign has only made those divisions deeper. Hillary doesn’t fight like that. It’s the antithesis of who she is as a person yet her rallying cry does not resonate in the same way.

Brand image is not marketing it’s about who you are. It’s about personality and it goes well beyond politics. Brands are about connecting with people emotionally; to get that emotional connection you need to have trust and respect. Trump has earned it from his followers. Hillary can’t seem to gain that traction. She needs to build her brand power because one of the things that attract us to brands is the power they project. Power is largely a matter of perception so what’s Hillary’s power of “influence” and her “reputational“ power? Today Hilary needs to break out from being the famous person you don’t know.

The shock and awe of Trump’s statements early in his campaign justified the frothing fulmination of the media, but the initial shock and awe has dissipated and Brand Trump has proven to be a credible Presidential candidate so he’s bigger than ever and as much as his remarks outrage, they don’t seem to faze his fans. Trump is like a Chrysler 300; big and powerful while Hillary is more like a Lincoln MKZ with more style and quality.

Trump can keep banging the drum and be consistent on what made his campaign successful just like an ad campaign with a core, consistent message repeated over and over again. He’s got a rallying cry. What has been Hillary’s stump pitch?

Hillary has a no nonsense approach and is talking about the nuts and bolts of getting America off its rear end and helping Americans live a better life, but it’s not clear. After she was ill she’s said that she has had time to reflect and now she needs to deliver her campaign to swing voters with more energy and act more like a challenger brand that can flank Trump head on. Her idea of moving America forward needs to be framed more than just Obama redux. We don’t want to move we want to accelerate. And yet Obama had a stump pitch, he had a rallying cry, he had the campaign of Hope and lots of America loved it, twice.

Today is the final clash of the titans and one of the many challenges faced by Trump and Clinton is effectively defining their true vision and values for the public, especially those who are undecided. This has not been a quick or easy process because they’re not just defined by the Commander in Chief job title or the job description.

Today Hillary needs to take the
15-words-or-less stump pitch challenge. Hillary has constantly compared herself to Trump and how different they are. Rather than focus on Trump, she should be just speaking about who she is at her core and what she will do. Her brand needs to be a promise
of the value we’ll receive.

We see the “right” direction you’re going in, but where does it lead and does it work? Thoughts with Alan Rappeport, April 14th, 2015. The New York Times:

Okay, time to wake up. What does Schultz need to do to keep the initiative alive. Here’s my perspective with CCTV Anchor Michelle Makori on March 25th, 2015.

Fortune. It reveals a sleazy course of conduct by many large US corporations and reads like a tragicomedy. Making it worse is the fact that these corporations still believe they’re good corporate citizens that deserve the same benefits in the US!

Clearly the US Government has been drafted into a war that it created and needs
to shatter its complacency and ensure that strong rhetoric is not left to stand on its own, without strategy to translate words into positive action. This spreading sore
is a hangover of America’s lacks corporate tax system and requires the cleansing fire of restructuring with a conference of action that closes loopholes and reasserts the interdependence of US corporations and American society with shared responsibilities, shared values and shared benefits. Shareholder value might be
a result not a strategy, but tax is the picture and it doesn’t change the issues.

What has made American corporations great is their passion for acquisition, exchange and accumulation, but the grim fact is that many large US corporations haven’t paid billions of US taxes for years so this maneuver is the “post hoc ergo propter hoc” fallacy (after this therefore because of this). The Government must stop being shackled by the crippling decisions it’s made in the past regarding US Corporations’ legitimate and sanctioned avoidance of US taxes. It’s akin to junk food – it has little nutritional value (for the country), is bad for your health (economy) and is a hard habit to kick. Facts are stubborn things and this news just makes avoiding US corporation tax official so get your wallet out and pay their share.